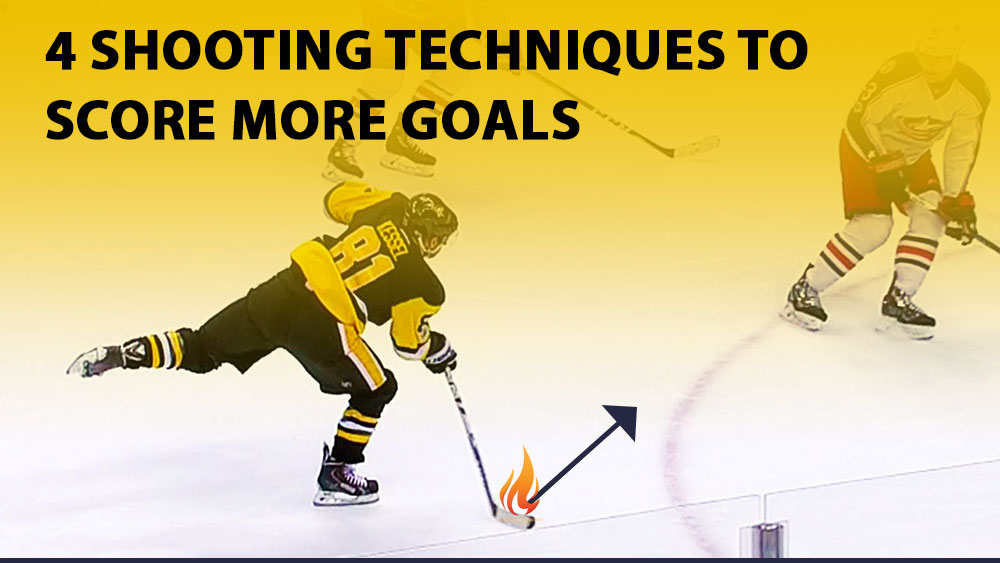 Hockey is a great sport for a child to play, especially if the child's parents are hockey fans! One of the most difficult skills for a new player to learn is shooting and aiming a hockey puck. Being able to shoot a hockey puck is a fundamental skill to playing hockey. To score a goal, you must be able to shoot a hockey puck with some sort of accuracy. Professional hockey players make shooting a puck look very easy, but it really takes practice to get the motion down.

Typically during a hockey, the there is usually between 30 to 50 shots on the opposing teams goal. Therefore, you want to make sure every shot you take is effective as it can be. A good skill when learning to shoot a puck is being able to shoot the puck fast. By shooting the puck fast, the goalie will not have time to set up a block to prevent the shooter from scoring. A quick shot is usually the result of a shot that is taken directly off a pass from a teammate or from a rebound.

A common mistake for new players is to hold onto the puck too long with their stick while they are preparing their 'perfect' shot. By taking more time to set up your shot, the opposing goalie has time to set up their block or it may even allow a defensive player to strip the puck. It is also important when aiming your shot, to keep your eyes aimed towards where you would like the puck to go. This will help the accuracy of your shot by being able to place the puck where you want.

All great professional hockey players started developing their hockey skills at some point. It is never too late to refine your hockey skills by practicing extra before or after your hockey teams practice. If you can't find extra ice time, you may want to look into street hockey to help refine your skills when you are off the ice.

My second teaching job was at a somewhat run-down and extremely understaffed middle school that was known for its hockey team and not much else. The year I arrived was, by a strange coincidence, the year their hockey coach left for better pay at a private school across town. As soon as the administration found out I had played hockey in college, they asked me if I’d like his job.

I had no experience coaching hockey-or anything else, for that matter-at the time, but I said yes anyway. The responsibility came with a small bonus, and I’d always enjoyed working with kids both inside and outside the classroom.

In my years of coaching hockey, I noticed many, many kids struggling with the same basic skill: transitioning between skating forwards and skating backwards (or the other way around). This is something that everyone needs to do pretty frequently over the course of a standard hockey game, but it’s particularly important for those playing defense.

The first step to being good at making this transition is to get comfortable doing it with both skates on the ice. Just be careful to maintain your balance as you bring one foot in front of you and the other behind, turning as you go.

Most beginners fall their first couples times doing that, especially if they attempt to do it with any speed. Once it’s started to come naturally, though, players should switch to the more advanced method, in which the rotation is done by lifting the skate. This technique is preferred for a reason-when you keep both skates on the ice throughout the entire transition, it creates a lot of resistance that slows you down far more than you can afford in a game.

To go from forwards to backwards in the preferred manner, then, you lift one skate off the ice and turn it around as much as you can. Ideally, you should end up heel-to-heel, but many people, including me, just aren’t flexible enough for that. It isn’t a problem as long as you turn that skate as much as you can, put it down, and then lift the other skate as well.

This is a skill that takes practice, but it’s something anyone can master given time. Good luck! 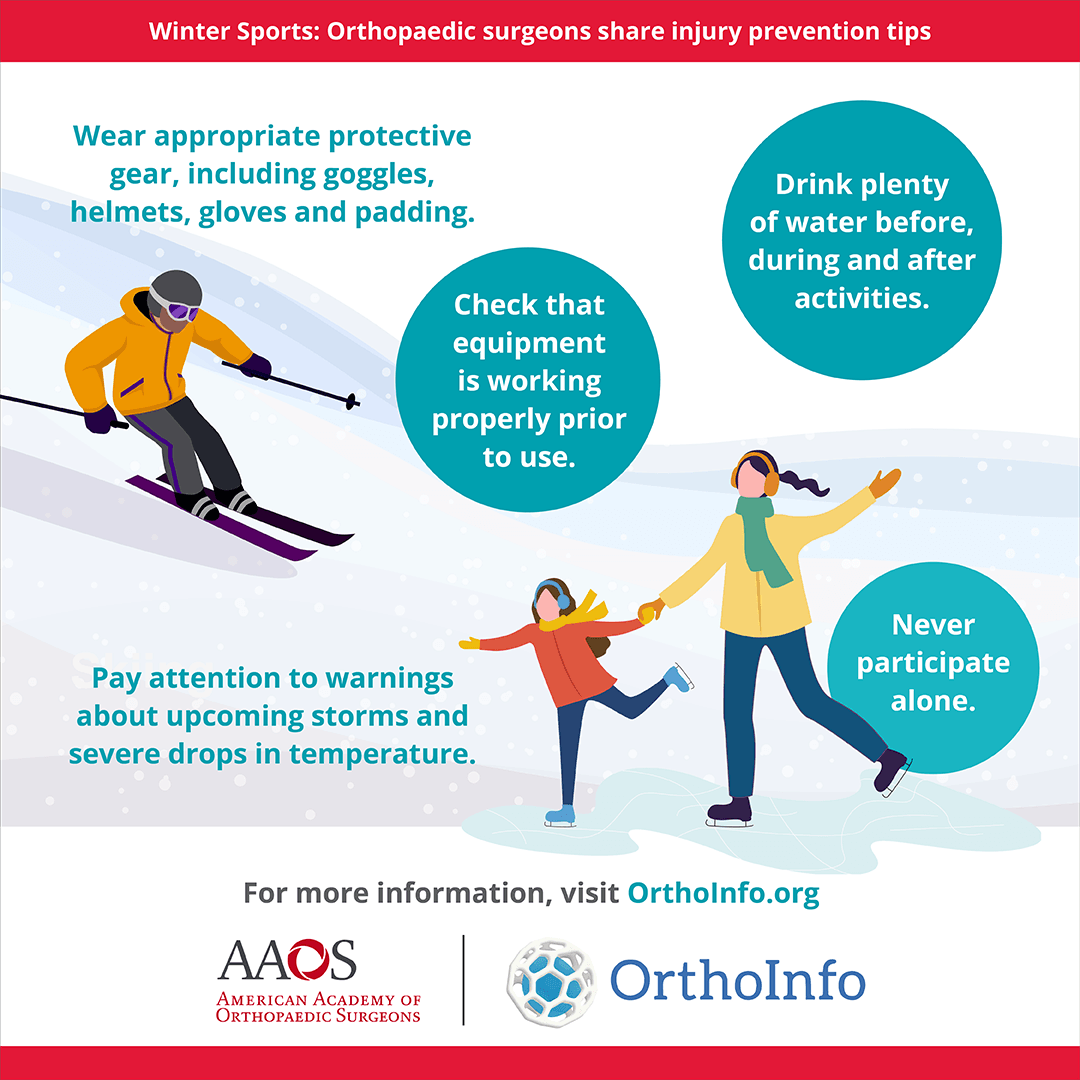 Winter sports like skiing, snowboarding, sledding and ice skating are all fun and provide hours of fun and excitement for kids and adults, but can also be very risky and injuries can occur in all of these sports. Children are especially vulnerable for serious injuries when participating in these sports. Parents must recognize the risks and do all they can to protect their children while allowing them to have the fun that winter sports provide.

Wearing a helmet can be one of the top safety items for winter sports, as with any other sport. A helmet can reduce the risk of head injuries in skiing accidents by up to 60 percent. That indicates that it is a smart step for the child to wear a helmet during their play time outside.

Other safety precautions with skiing and snowboarding are items that seem like common sense, but things that many people do not think about. If you are new to either sport, take a lesson or two before you hit the ground. Also, never ski or snowboard alone and avoid areas where there are trees and other obstacles to lessen your chance of accidents. Also, have all equipment checked once a year and adjust the equipment each time you use it.

Sledding is another winter sport where head injuries occur often and could be widely avoided with a helmet. Also, no one should ever sled where there are roads and motor vehicles or in overcrowded areas with trees, obstacles, or people. Be sure to sled sitting up and with your feet going down the hill first. Never allow a friend to sit backwards on the sled or to lay down on it, this is when injuries can occur most often. It is a good idea to use steer able sleds and not intertubes, snow disks, or other objects that people have found make good sleds.

Snowmobiles offer a whole new range of problems and injuries that can occur while playing in the snow. Never pull skiers or sledders with a snowmobile. Make sure to always operate the snowmobile with an experienced driver and at safe speeds. Never allow anyone who is intoxicated to operate a snowmobile and never operate one alone. Always wearing goggles is another way to prevent injuries while on a snowmobile.

Ice skating is another winter sport that can be dangerous that many people never think about as a danger. The biggest danger of this sport is the ice. Ice needs to be thick to be safe. Ice can be frozen on top and seem to be frozen thick, when the water is actually not frozen other than the top layers. Think of the times that people have fallen into the ice when out on local ponds and places where people think that the ice is thicker than what it actually is. Also, if skating with other people, never skate in the opposite direction of other people. Be sure to keep the blades of your skis sharp to avoid the risk of falling. Dull blades will always increase the risk of falling.

The speed of winter sports can increase the force that is behind an accident and can cause injuries similar to those injuries suffered in car crashes. Winter sports can be a lot of fun and offer hours of exercise, but as with any other sport, be aware of the risk of injury that can occur. Have fun but be safe!…