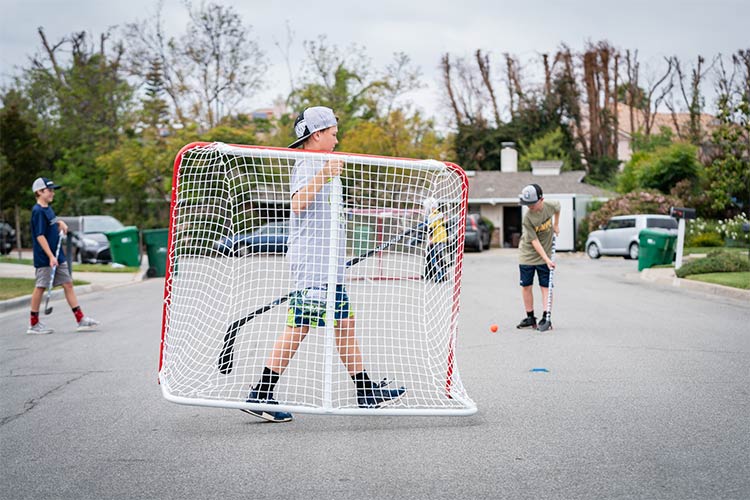 If your local fields are always being used for organized sports like Little League, football or soccer, it is time to look to
alternative ways to have fun outside. Street Hockey is a fast-paced and exciting game that will entertain for hours and recreate some of the action seen in the NHL. It only takes a little time to set up, a group of people and a lot of fun.

Goals, sticks, ball/puck, players, spray paint and a street. Most of the hockey gear can be found at big box stores like Target, Wal-Mart or a sporting goods store like Dick's Sporting Goods. Check yard sales and flea markets to find ued hockey sticks that will work fine for playing.

Location is the key to having your street hockey league work out. The best place is a side street or small one way road because you want to worry about getting past other players not cars. Also look for the flattest surface; you do not want one team going uphill as the other goes down the whole time.

Goals are easily found at retailers like Wal-Mart and Target, but if you are trying to save a little money, then buy some plastic piping at Home Depot, a cheap net, and build it yourself. Sticks can also be found at many retailers along with Rollerblades and all of the proper safety gear.

Using a puck or ball depends on what you like. Balls can go smoother and make for a faster pace, but hard hits may require you to skate all the way down the street to retrieve it. Pucks are fun and are more authentic to how NHL
players play on the ice.

Set up the goal. Simply place the goals out on the street about 25 to 30 yards apart and you'll have your area set up. To get more technical, use white or orange spray paint to create goalie boxes, face-off lines and other areas like a
penalty box.

Once everything is set up, you are ready to play. The most important thing is to avoid getting in the way of traffic, so as soon as a car is seen or heard, have the goalies pull the goals off to the side. The when the car is gone, simply have a face-off and restart the action.

Face-offs can be conducted by an on-looker dropping the puck or ball in or by having two players slap the sticks three times and going for the ball after the third time. This is street hockey, so bending of the rules is allowed.

Have Fun. Most important, just remember to have fun. This is not the NHL, so do not take it so seriously, and make sure to wear all of the safety gear to avoid injuries.

Police may prevent you from playing on your street due to neighborhood complaints, so make sure it is okay with your
neighbors and ask them what the best hours to play are.

If you have enough players, you can set up multiple teams and run a small tournament. When other teams are not playing, assign a few of the players as referees so the game is played fairly.