Warhammer: Dawn of War is based on the tabletop game Warhammer.

Naturally, a lot of hype was generated when it was announced that Relic, of the Homeworld fame, would be in charge of the game.

While Dawn of War didn’t come out and knock every other RTS game off our hard drive, it is still a very good game.

I can honestly say that other than micromanaging my units, I rarely take the time to watch battles.

After all, one can take only so much repetitive motion, the same hitting motion, or the same death animation before getting completely bored and scrolling off to watch your resources mine resources.

Warhammer is perhaps one of the first RTS games were watching a battle is almost as fun as commanding the battle.

Each one of Dawn of War’s units is modeled to look like cast pewter characters, they are animated in full 3D and each has a distinct set of animations.

One of my favorites is Eldar’s Avatar.

The Avatar is the Eldar’s ultimate unit and takes a whole lot to summon, but once summoned, you won’t be disappointed!

Once in a while, if you are watching attentively, the Avatar, basically a 20 foot tall God wielding a huge flaming longsword, will gore a unit with his longsword and watch it squirm helplessly as it lays impaled, and then casually toss it aside to find its next victim.

Now if you need any other reason to at least gives this game a try, please read on warpath.guide, I, on the other hand, was pretty much convinced after my Avatar gored one of my roommate’s commanders and tossed him aside… let the smack talk begin.

For those who would like to try the single-player campaign before dipping into the multiplayer action, Dawn of War offers a Space Marine campaign that details the effort of the Blood Ravens, an elite Space Marine Army, to uncover why everyone is so interested in the backwater planet of Tartarus.

The storyline and plot are standard fares, if you haven’t figured out what an RTS storyline sounds like here’s a summary: you fight a group of bad guys and when you have eradicated them, you realize that there is a greater evil lurking, so you eradicate that too.

The missions are also pretty plain, build a base, build an army, destroy the enemy.

The multiplayer aspect of the game is where it’s really at.

It is through controlling these critical points that you can receive the necessary resources to build more and better units.

The need to control these points also forces those hated turtlers to come out of their shells. 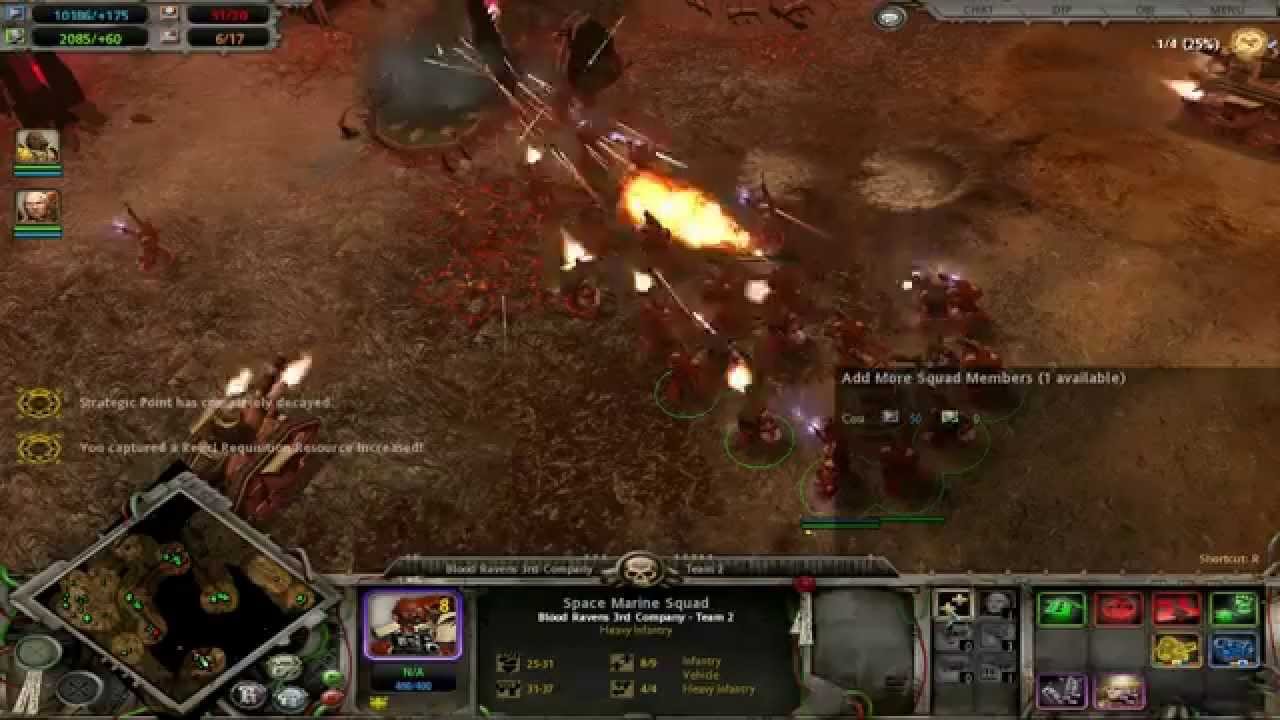 This game is all about expansion and engagement.

With factors such as terrain and cover and with the fact that you don’t have to worry about managing resources, being the better strategian will almost always win.

Another feature that really helps with the pace of this game is squad requisition.

Instead of building individual units, your units come in basic squads that you can upgrade with more squad mates or with better weapons.

The ability to do such a thing allows you to keep fighting on the fly as well as to adapt to your weaponry to counter the enemy’s strategies.

No more walking your whole army back to your base to heal.

Unfortunately, there are still some balancing issues in multiplayer.

I play Eldar and I know for a fact that I can mow down any Ork army but I also know that there is no way I could win against Space Marines.

Eldars are supposed to be like elves and mow their enemies down from far off, but when the enemy can just jump into your midst or when they outrange you, your physically pathetic warriors will be getting the beating of their life.

Perhaps the most obvious and the most frustrating imbalance is the Space Marine Dreadnaught.

For the life of them, they refuse to die, and when they do die, they tend to take half of your army with them.

But these issues will hopefully be addressed in a patch.

There are so many RTS games out there and I’ve played so many of those RTS games, Dawn of War certainly comes across as one of the best.

But the game still sticks too much to its tried and true RTS roots and that’s what’s preventing it from getting my Editor’s Choice.