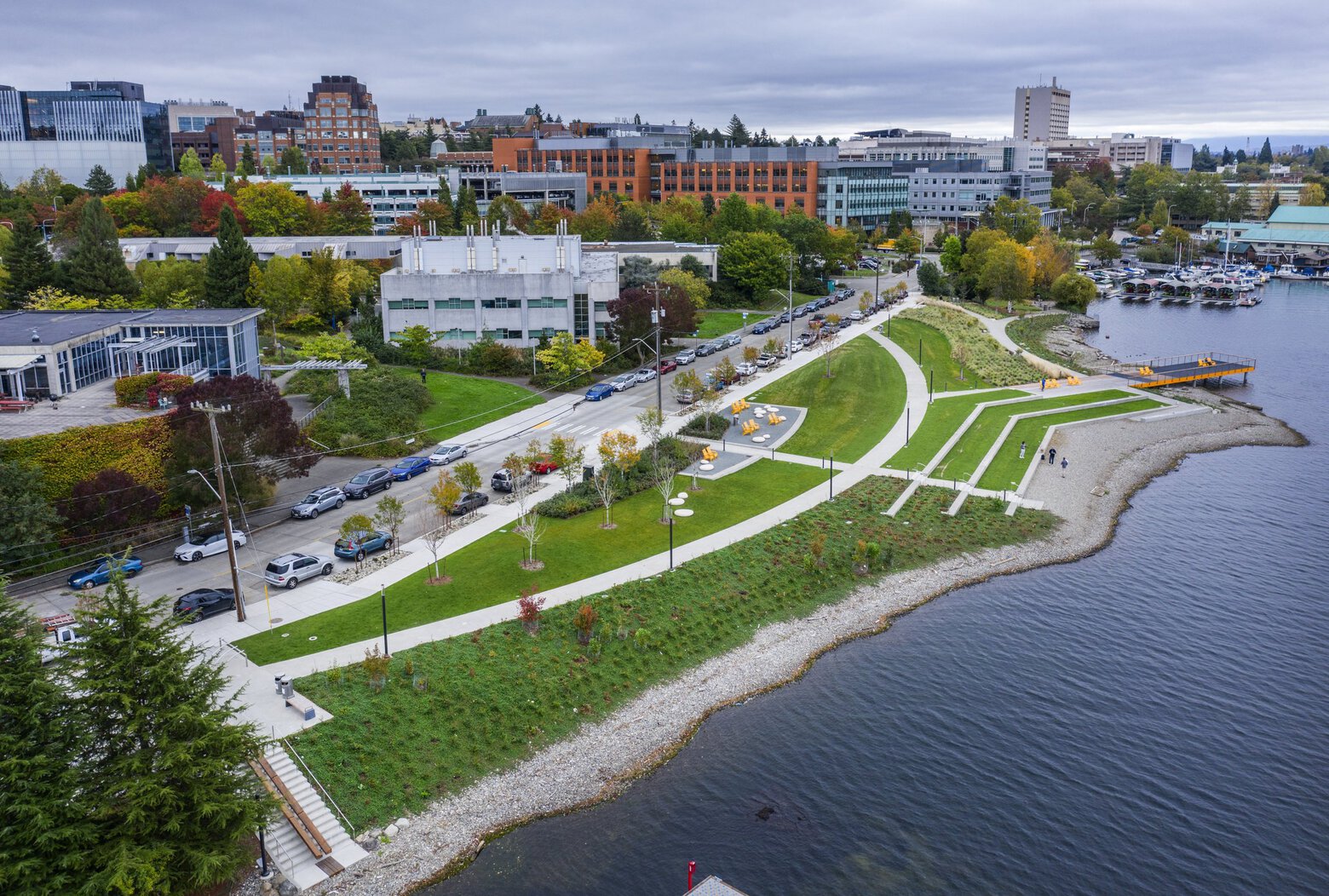 The potential of the area occupied by the waterfront was known as early as 1792. However, development did not begin till 1852 when the piers in Pioneer Square were built. On completion of the piers, the area soon became a center for commerce and trade in coal, grain and timber. Rapid growth ensued. In 1889 a fire destroyed a large swathe of downtown Seattle and the Waterfront. Seattle rebuilt the damaged sections. Then came the gold rush and Seattle assumed the role of gateway to Alaska. The city built itself a major port and with it Seattle’s growth and future were assured.

The creation of the Waterfront as a tourist and recreational area started in the 1970s. Buildings along the waterfront were converted to shops and restaurants. Development of the Seattle Aquarium and parks along the water soon followed. The Port of Seattle moved its Headquarters to Pier 69. A terminal was set up for cruise ships headed for Alaska. It is no surprise the main street of the Waterfront is named Alaska Way.

The Seattle Waterfront is an eclectic mix of shops, restaurants and entertainment. It also boasts the freshest and best seafood. Waterfront dining has a special meaning here. The view looking out over Puget Sound is spectacular. The busy goings-on of boats, ferries, water taxis, on the water and the people on the piers makes for a pleasant scene. A free Metro Bus service provides convenient transport along the Waterfront and connects to points beyond.

Seattle has a wealth of attractions and among them the Space Needle is a must see. Built in 1962 for Seattle’s World Fair, the Space Needle is a prominent landmark. The 360degree view from the deck is outstanding. It looks out over the waterfront, Puget Sound and the city skyline. On a clear day, snow-capped Mount Rainier, majestic and tall dominates the view. The Cascades and Olympia Mountains can also to be seen.

The Waterfront has many curio and gift shops – all very touristy and appealing. It is not hard to lose sense of time on the waterfront. A visit to the Pike Place Market is a must. It is one of the largest and most famous Farmer’s Markets in the country. Built in 1903 this public market has operated continuously from 1907 onwards. Built on a steep hill the market occupies several levels. The main level of the market is for fishmongers and produce shops. The shop “Pike Place Fish” is a tourist attraction both for its large offering of seafood and for the fish sent flying through the air by staff from one end of the shop to the other. Seemingly, the flying fish never drops to the floor.

The slippery missile is always expertly caught in flight, wrapped, and handed to the appreciative customer. Asked why customers should come to Pike Place Fish? One of the guys, a fishmonger who works there, answered “Best quality seafood, best service, and the best looking fishmongers in the world!” All the right reasons indeed!

The Pike Place Market has a mix of shops at the many levels of its structure. The shops range from antiques and curios to comic books and everything in between. This is also a public market with the stated mission of letting the customer “Meet the Producer”. Individual farmers, craftsmen and entertainers rent tables and do business on a daily basis. The market has an engaging and friendly atmosphere making it the major tourist attraction that it clearly is.

Waterfront has much to offer. The Seattle Aquarium at the northend provides a close up view of sea life and the natural environment in the Northwest. A little further north is Odyssey, The Maritime Discovery Center and Nautical Museum. The Center introduces visitors to maritime activity of the Northwest and to Puget Sound and its ports and features.

Harbor cruises and tours to the islands of Puget Sound leave at regular interval. The island tours offer a glimpse into the Native American culture at Tillicum Village where dinner of the celebrated Salmon Bake is followed by a cultural presentation.

The Waterfront is a family destination with something for young and old. The waterfront’s parks are great places to take a break and relax. There are picnic tables and benches for the foot-weary tourist. It is tempting to buy a cup of coffee at coffee’s defining city and listen to one of the many concerts or maybe, just sit back and reflect on how beautiful the place is.

The Sport of Kings – Newmarket Horse Racing and the Stuarts