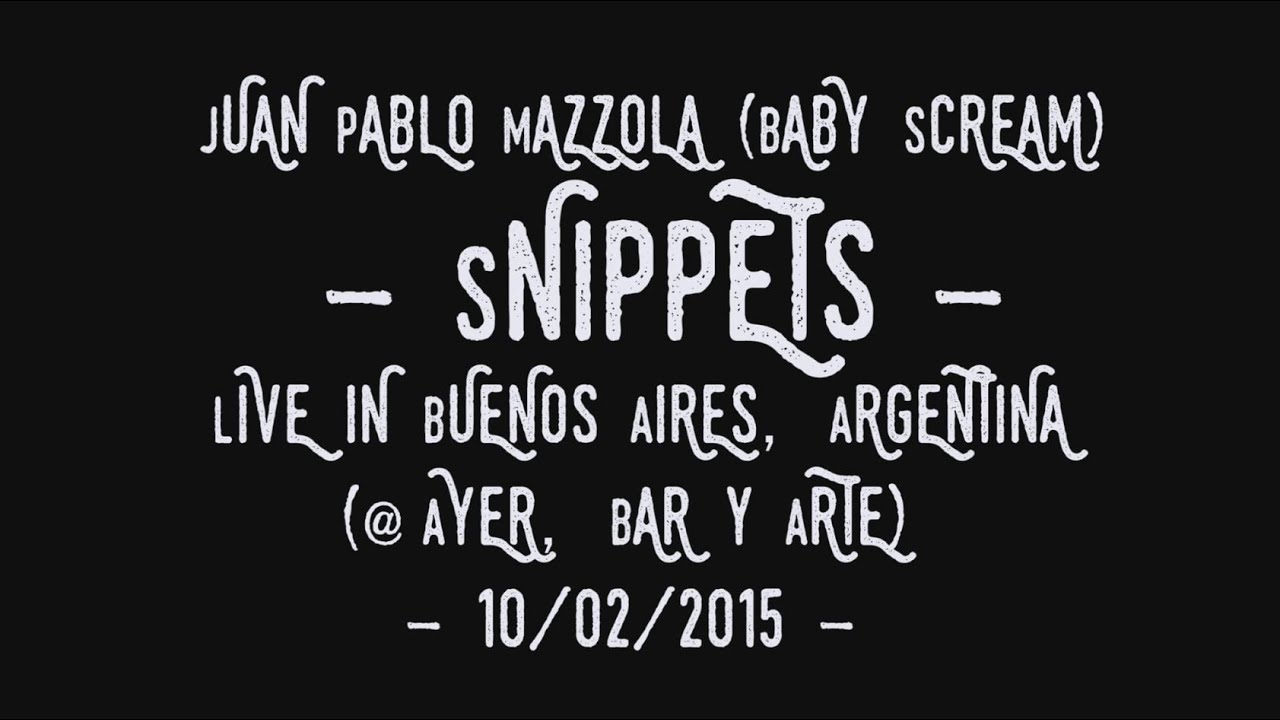 Ahead of the release of new EP Identity Theft, and having recently reviewed Baby Scream’s delicious Monsters EP, a simple and elegant lesson in melodic songwriting for guy-and-a-guitar types everywhere, Indie Suite decided to talk to the band’s founder and main driving force, Juan Pablo Mazzola, about the weird and wonderful experience of performing live.

Where are your best memories of performing?

JM: Playing at the Subrosa bar in Dortmund, Germany with and for my friends, in particular doing a Big Star cover with my friend Pille. Also I remember touring Germany with The Cheeks, opening their set with an acoustic guitar. Magic moments.

Once in Argentina a few years ago we played a really funny gig. You see I used to complain that nobody cared about Baby Scream and people were always telling me that our lack of success was my fault, the same people that never came to one of my shows! Anyway, there was this one night, we were playing in a real dive of a venue and the audience consisted of only 2 or 3 guys, and there were 4 of us onstage! In Argentina the laws got really strict about start times for shows because of a concert tragedy where 200 kids died. So we did the soundcheck at 19:50 and started at 20:00, nobody turned up until 20:30, by which time the show was over and we were already out of there. In a way that was probably one of the greatest shows I ever did, we played to noone and we played like it was our last show. The day after the show I was frustrated as hell..…. and people still insisted that it was all my fault, [he laughs].

What’s the strangest thing that’s ever happened to you while you’ve been performing?

JM: That definitely has to be playing in a football match in Bodoe, Norway, near the arctic pole in 2007. I played before the match and there were 5000 people, it was freezing and I was playing a song called “Slut”. In the song, there is a part in which I sing “Stupid little f**k”, they asked me not to say f**k because of the kids there. So I ended up singing: “I’m a slut, stupid little duck” and I remember thinking, “this is really weird, 5000 Norwegians near the arctic pole and I am doing a solo acoustic gig….singing that I am a stupid duck”. Yep, I thought I was losing it.

Who is the most inspiring person you have ever worked with?

JM: Muddy Stardust, I was introduced to him by my friend Ariel Belont. Muddy is a genius.

He plays everything, plus he was one of my heroes when I was a kid so meeting him and working with him was amazing. Also, Osvaldo Mollo, he was my guitar teacher in Argentina when I was 13 years old. Nowadays we play together, his sound reminds me of Jeff Beck / Gary Moore, bluesy and deep.

Baby Scream’s EP back catalogue is available to buy now. New EP Identity Theft is due for release before 2010.